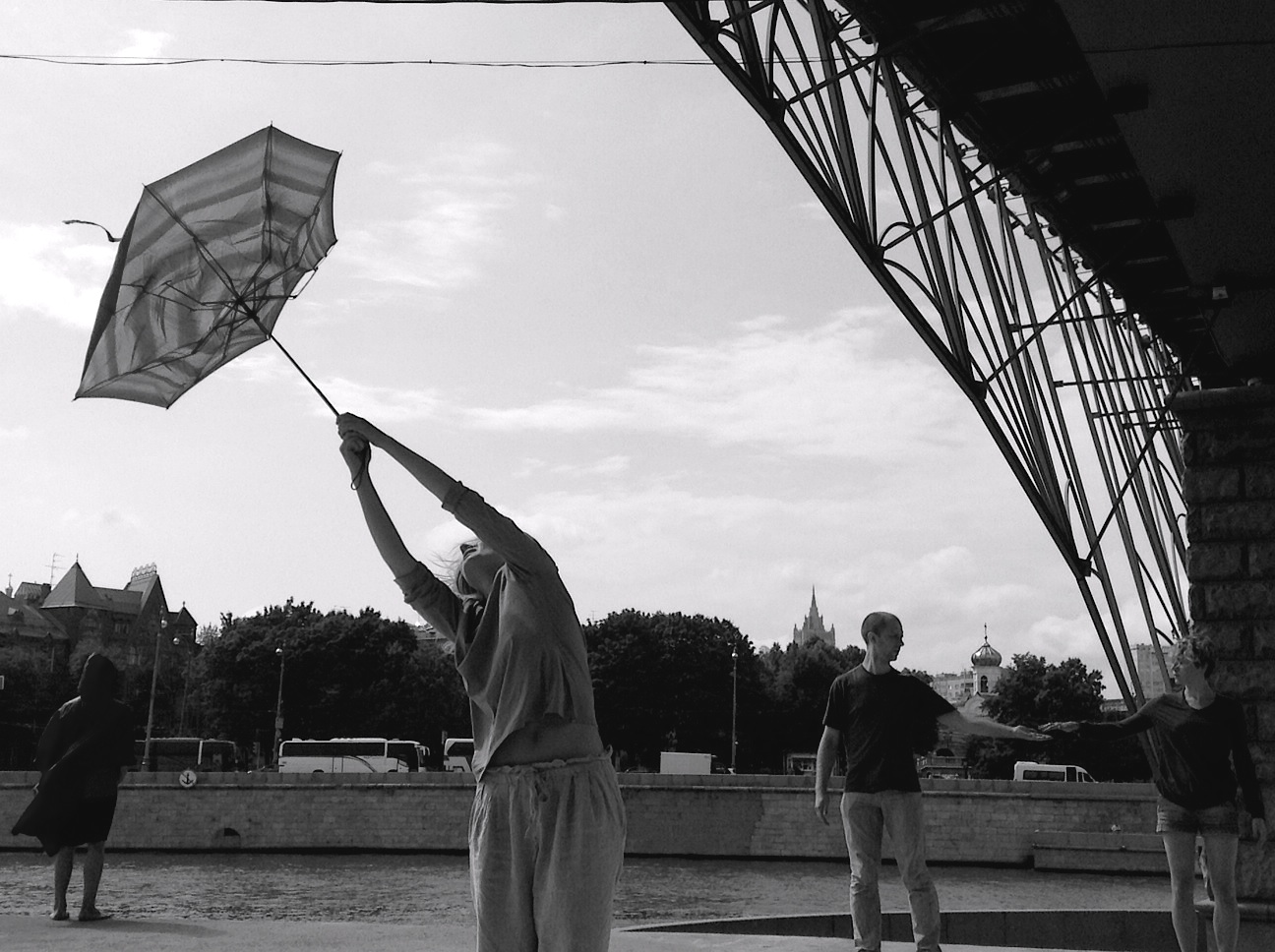 It seems inevitable that an investigation on invisible borders would bring one to encounter the self and the body as the ultimate boundary control center.

The afternoon rain had stopped. We gathered under a bridge to watch a performance. There was no clear boundary where it had started. One of the students was chatting with me while the man stood quietly in the middle of the paved elevated platform under a bridge holding a red umbrella. Still, framed by the columns of the bridge and the moving shifting background, incongruous with an umbrella in the sun- he started the performance. In the back, drifting carnival of boats and people. Left to right. Right to left. On the foreground- dancers moving into the center and then back out to the corners, where their movements became subtler, repetitive, quiet. A wild card would run through and disarrange the balance, the motion algorithms, which I considered premeditated. I could sense triangles, lines of movement and improvisations.

As the time slipped by, the urgency of understanding dance left me and a feeling came that I am a part of a space that is now being constructed by waves and energy of these interfering bodies. The bodies were acting, provoking, playing, and subverting the meaning. It created a vortex, which soon became a play for construction workers, curious by-passers and boat passengers. I was a part.

It ended quietly. I was left with a feeling of a significant infinite moment that can later be a part of something bigger and stretch into various directions. I walked away deciding to keep it for a while and not settle upon what it all meant.

To produce critical analysis on borders, the border inside is an important tool to consider. Sensing the invisible borders can be a challenge in research, cartography, mapping and detailed analysis of forces at play. But what was missing is confronting the borders inside: researcher as the point of departure.

As Polina led us through a workshop – we entered a stretch of time that we controlled. Deconstructing our bodies to skin, muscles and bones- considering the body as a fragile, breathing, reacting machine with its joints, and extensions, with its reactions and inhibitions.

Autonomous, complex and intuitive the self radiated out. Knowing this feeling before and recognizing it for what it was, I recorded a moment of stillness and control. Body projecting out in space. Morphing it, making the space my own.

A time/space warp, an exploration that cuts deep, a collection of infinitely small moments, lines defined as boundaries, portals into the worlds of others, portal into the awareness that comes with the ability to put two feet on the ground and let the structures pour in.

I end with this video https://www.youtube.com/watch?v=etGbiPfr-Bw. A collage of moving images I put together to the soundtrack of Thollem McDonas- a dear friend and a master improviser in life. The track was called ‘as many worlds’, where line of the body traces through, desperate for the worlds unknown and unseen. An exploration into the ‘un-space’.