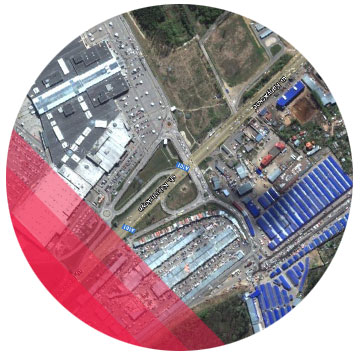 Slavyanskiy Mir is an informal, partially open air market and bus station in Moscow. It sits at the “border” of what is considered old and new Moscow. A few years ago it could have been considered on the edge of the city, but today remains a vibrant site for flows of people and goods in and out of the city, particularly migrant workers, traders and travelers to the caucuses.

Hence, it serves as a fascinating site to study the social, economic, historic and political boundaries of the city and the perceptions of the “border crossers” flowing through it.

This site visit to Slavyanskiy Mir seeks to investigate the spatial practices and narratives emerging from the site as we examine it as a case study for invisible borders in Moscow. We will use ethnographic fieldwork methods like photo-documentation, interviews and observation.

The fieldwork will be conducted with a collective team of participants on Tuesday, July 9th from 12pm – 6pm, with a debriefing at Strelka (Studio DVA) at 10am.

Slavyanskiy Mir is the current site of the former market at Luzhniki, and a major transit hub for people coming to Moscow from the Northern Caucasus. It lies just outside of the MKAD, and is on the border of greater Moscow region, next to a cemetery. It may be the most visible emerging ethnic enclave in the city, and is continually being developed with formal spaces and commercial businesses like IKEA and shopping malls being established nearby.

During the collective fieldwork, we will use media-based ethnographic research to examine this site and document stories and experiences which challenge the common but usually one-sided perception of migrants and their role in the city. By giving a voice and revealing / sharing their perceptions, we hope to also create a conversation as a way of overcoming these borders.