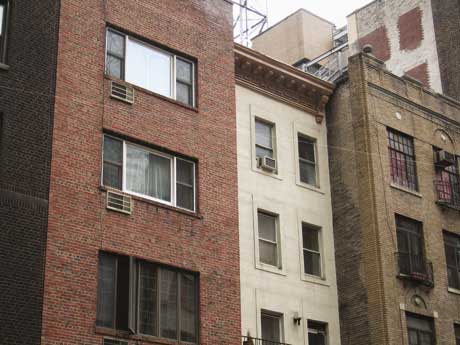 About 19 kilometers (12 miles) of what appears to be black polypropylene twine, 3mm in diameter and suspended in the sky, demarcates an important boundary in Central Brooklyn. The twine is strung between the tops of utility polls and street lights, forming a closed loop around a densely populated urban area. The area it defines is a religious enclave, a space within which particular acts on holy days are permitted. Within the confines of the string line, Jews are permitted to perform certain tasks, such as pushing strollers and carrying things on Shabbat, the Jewish day of rest.

This nearly invisible boundary is called an eruv and according to Sabrina Gschwandtner, there are over 150 eruvium in the world. While New York City was only introduced to the eruv in 1905, it now possesses the greatest number of these religious enclaves compared to any other city. See Wikipedia for a list of eruvin by country. There appears to be no eruvium in Russia and very few in Europe, which is interesting considering Russia has one of the largest populations of Jews in Europe.

Researchers with the project, A Spatial Project, point out that contemporary eruvin are scaled upon the infrastructure of the modern megalopolis. What was in the 1st century a demarcation spanning a shared courtyard now takes form on the heavy infrastructure of the global city. Since most utilities are buried in Manhattan, the string can be found tied to bridges, sea walls, and elevated rail lines. The enclave slowly grows to encapsulate an area that can no longer easily be walked, a scale to match the megalopolis.

If infrastructure refers to those things in the built environment that reside below our attention, below ground, essential for the operation of the city, the eruv is an invisible, even secret suprastructure extending overhead, etched on public infrastructure. It is a transformation of public space into private space through spatial practice. Along these lines, the the ASP research collective ask some interesting questions relevant to our exploration of the invisible borders produced to support spatial practices in Moscow:

To this I would add questions investigating the way media is used to support the definition of this segregated space, i.e. the use of hotline telephone numbers, web-mapping service applications, and status listserves and web portals. What are some of the media methods for producing and supporting a nearly invisible border? What are some of the social situations or controversies produced by the delineation of the these boundaries (as Jon Stewart points out, eruvs are not necessarily a medium of exclusion)?

What other secret or nearly invisible infrastructures are there in the city that inform the spatial practices of religious and place-based communities?

[above image from the Cabinet article: A Brief History of String by Sabrina Gschwandtner. Assumptions about the material make-up of the string are based on the appearance matching a recommended posted here.]