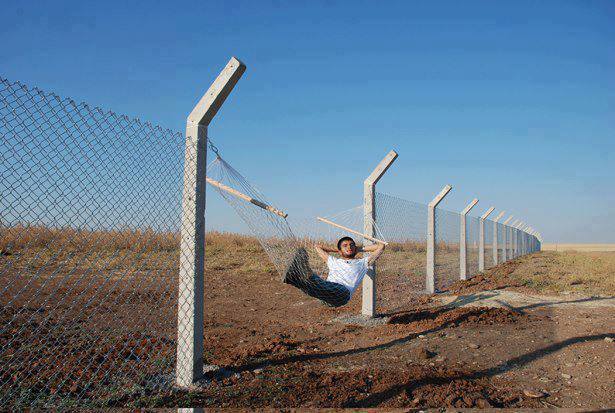 Thinking about maps, the first thing to come to mind is political borders. The delineations between countries, between spaces and between people which in an age of globalization make mobility more a challenge than one could hope.

Lines drawn on paper become real projections and spaces of control. These physical borders are physical boundaries which now regulate the flows of people.

There are visible borders like fences and walls, and invisible borders like visa and immigration controls. How can we over come or challenge these borders? Can making maps change how they are perceived? How do we move from the map into a real life change or intervention?

This is a picture of a border Hammock by Murat Gok in Istanbul, Turkey. It highlights an individual’s ‘hack’ of the border, which challenges its authority and securitization creating a sense of calm and relaxation. What else can we do with borders, particularly the ones we do not see?

The picture is relevant to this course for a couple of reasons; on the one hand, it refocuses us on the current situation in Gezi, where people are occupying a public space but being threatened with force by the government for their free use of space. But also, in this workshop we will look at the city of Berlin, which is home to a large Turkish immigrant population, one which experiences invisible borders almost each day.

Although it’s been 50 years since Turks first went abroad, primarily to Germany, to earn their bread, Turkish people overseas are still far from being able to function as an efficient diaspora, and have difficulty in going after their rights in foreign lands. The ability to express oneself in the language of the country they live in, risk of losing cultural identity, difficulty in taking part in the direction of the country — either at the local or country level — are still major problems Turkish people who live abroad are confronted with.

How can mapping and urban interventions which build on these borders and boundaries and overcome them?